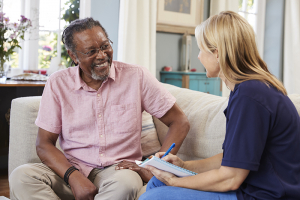 Diagnosing Parkinson’s disease through detecting a particular odor may be possible.

You may very well not recognize her by name, but you’ve very likely heard her story. Joy Milne has a very unique talent: recognizing Parkinson’s disease through her nose. Her gift was discovered when she recognized what she explains as an “overpowering sort of nasty yeast smell” in her husband of 10 years. Subsequently noticing other changes in her husband, such as personality and mood changes, he went to the doctor for medical attention, and was given a diagnosis of Parkinson’s.

After joining a Parkinson’s support group meeting, that exact same aroma penetrated the room – even though only Joy was able to smell it. Actually, she was also able to detect varying degrees of the odor – some whose odor was faint, while for other people, it was much stronger. With both her own and her husband’s medical backgrounds (she a nurse and he a doctor), this revelation was definitely important and called for further action.

Her story led her to help Tilo Kunath, a Parkinson’s disease researcher at the University of Edinburgh, with the goal of developing a tool to provide earlier diagnosis – and ultimately, treatment – of Parkinson’s.

Although first skeptical of the probability of Parkinson’s being uncovered through odor, he was open to additional exploration after finding out about the results dogs were having in identifying the odor of cancer in patients. Next, he developed a way to assess her abilities, by giving her a random assortment of t-shirts – half of which had been worn by someone clinically diagnosed with Parkinson’s, and the other half by those without the disease – and her accuracy rate was remarkable. As a matter of fact, she missed the mark on only one of the t-shirts, worn by someone without Parkinson’s, but who actually was later determined to have the disease as well.

Kunath says, “Imagine a society where you could detect such a devastating condition before it’s causing problems and then prevent the problems from even occurring.” Dr. Thomas Hummel of the Technical University of Dresden’s Smell & Taste Clinic, adds that even though the idea is fascinating, there are still several questions to first resolve.

Parkinson’s disease, together with a variety of other chronic health issues, can be more successfully managed with the assistance of a home care provider like CareWorks Health Services. As a top provider of Laguna Woods elder care, local families have trusted CareWorks Health Services since 2010. Contact us online or give us a call at (949) 859-4700 to find out more. See our service area page for a full list of the communities we serve.