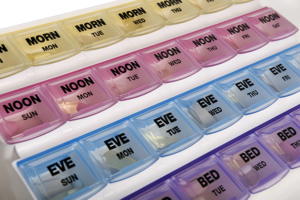 On average, a senior takes approximately 15-18 different prescriptions every day, so as senior care experts, we know that it’s not hard to understand why so many seniors miss doses or take incorrect amounts of their medications. But there are health risks that happen because of these medication errors. Enter the creation of the pill organizer: such a simple way to organize medications by placing them each within the correct slots for the different days or times of the day. Problem solved, right?

Shockingly, a recent study points to a much different outcome. Aging adults acquainted with taking medications from the original packaging who changed to a pill organizer were bombarded with health concerns, including falls, hypoglycemia, and in one case, a patient unable to get out of the tub until eventually a rescue 12 hours later.

Interestingly, it was the seniors who had begun to use pill organizers (who hadn’t previously used them) who were the ones to experience health concerns. The idea behind these shocking results comes from the concept that the seniors were omitting doses or taking their prescriptions incorrectly before using the pill organizer, and were experiencing negative effects from taking full doses of their meds.

Lead researcher Dr. Debi Bhattacharya stresses the need for individuals getting ready to change to a pill organizer to first consult with their physician or pharmacist to confirm dosage amounts. And she makes clear, “People who are already using a pill organizer without any ill effects should not stop using it as they do seem to help some patients take their medication as prescribed. It’s the switching stage which appears to be the danger.”

Our senior care experts at CareWorks Health Services can help with medication reminders to ensure seniors take prescriptions when they’re supposed to, assist with transportation to get prescriptions, and help with noting any adverse reactions that can be reported to the physician immediately. Give us a call at (949) 859-4700 for invaluable assistance with keeping your senior loved one healthy and safe.